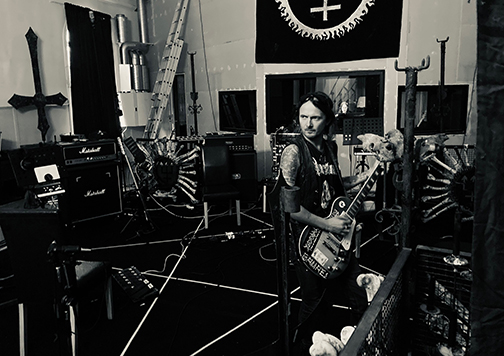 Today, NUCLEAR BLAST RECORDS are proud to announce the signing of the notorious Swedish black metal collective WATAIN. The band has now entered Necromorbus Studios, located inside a church north of their hometown Uppsala, to record a new album and follow-up to the ferocious 2018 opus Trident Wolf Eclipse. The new full-length is scheduled for a release through Nuclear Blast in the first half of 2022.

“Ladies and gentlemen, it is with great reverence and infernal hunger alike that we now stand before the next chapter of Watain. Armed with the faith, force and fire accumulated during the Trident Wolf Eclipse era, we are now entering terra incognita to face again our inner selves and the ever-expanding abyss that roars within. A few months of hard, noble work lay ahead, and we could not be more ready for it. We are most eagerly looking forward to sharing the result with you all in the wild times to come. Until then: stay hungry, stay deviant, stay free and f**k the world!” – WATAIN, Uppsala 2021

Jens Prüter, Head of A&R Europe at Nuclear Blast, comments:
“I have always been fascinated how Watain builds their own cosmos based on their primordial fire of will. It’s more than just music. It’s a universal experience of darkness and light. I first started working with Watain in 2013 and was thrilled to contribute to their success and the highest chart entries the band has ever had. It’s a pleasure to welcome them now to Nuclear Blast Records to continue accompanying their path – wherever it will take us because the path is the goal.“