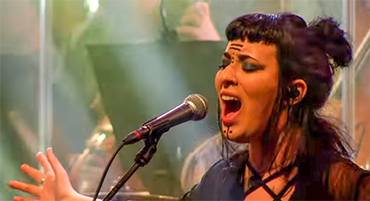 Swiss group Celtic Frost is beloved by extreme metal fans worldwide, and few bands from any genre match their recorded catalogue’s dynamism. In 2008, vocalist, guitarist and visionary in chief, Tom G. Warrior, disbanded Frost, and for all the fans knew, that was it.

Warrior formed Triptykon and continued the narrative from Frost’s final recording, Monotheist (‘06). Two well-received album’s, an EP and a single followed. However, it wasnt until 2019, when Triptykon joined Holland’s Metropole Orkest at Roadburn, that Warrior would capture lightning in a jar and conjure his grandest musical statement since the supreme, Into the Pandemonium (‘87)

The orchestra added an eerie transdimensional quality to a Frost classic, “Rex Irae (Requiem)”, from Into the Pandemonium, and also “Winter” from Monotheist. However, the crown jewel is the stunning “Grave Eternal (Chapter two), Transition, Parts 1-6”, which is a movement partly written during the Frost era, and performed for the first time during Roadburn. The performance was captured on the album, Requiem, and is a must-have for any true Frost fan.

Every person in attendance at Roadburn was integral to the success of the performance. From the band to the orchestra, the technicians, and even the audience, they all combined to help Warrior realise one of his grandest visions. And there is a member of the performance troupe who deserves special recognition.

Safa Heraghi is the solo female vocal accompaniment to Warrior’s gruff singing. Her contribution to the evening cannot be understated. She swoops and soars throughout the many movements, capturing a sublime balance of restraint and power. If Warrior had chosen a soul who wasnt up to the task, it might have ruined what Heraghi helped ensure was a performance of a lifetime.

In early 2021 I asked the gifted Heraghi if she would like to chat for the Scars and Guitars podcast. Unfortunately, she couldn’t; however, she said to send through some questions, and she’d have a go at answering them.

So, here they are.

Your performance with Triptykon and the Metropole Orkest at Roadburn 2019 is astonishing. The vinyl edition of the recording is just beautiful, and your voice soars. What was the most memorable moment of the evening for you?

You’re going to hate my answer, but I truly was not aware of the show at all. I intensely focused on what was musically occurring and on not making mistakes, haha. I think what remains very memorable is the moment we went off stage and both band and orchestra were congratulating and praising each other. It was almost surreal; we all had huge sweaty smiles and an intense feeling of relief.

What was going through your mind as you first stood on stage?

Did anything happen during the performance that shouldn’t? E.g., Were there any bloopers or accidents? (it all looks so perfect!)

Not necessarily, but I had to turn off my in-ears at some point because I was too close to the drums and they were bleeding into my mic. So, that meant that I could not hear myself all too well.

What did you and Tom talk about after the concert? E.g., Were you both relieved, happy, or exhausted? All of the above perhaps?

Actually, we didn’t talk much – a lot of press talks were scheduled with Tom that evening. I spent most of the evening with Vanja and our mate Job; we talked about future music projects (Job and I founded a band together because of that talk) and other random subjects that took our minds off Requiem.

How much input did you have regarding your parts? E.g., Was the vocal already composed or could you add your ideas?

Yeah, so obviously “Rex Irae” was already composed, so I was simply left to my own devices to reinterpret the vocals. As for “Grave Eternal”, I wrote all my parts. I composed most parts before jamming with the band, and other few lines I retouched during our jams while feeling the piece in the room.

Has there been any talk of taking the ‘show on the road’? Hint: A performance at the Sydney Opera House would be divine.

The joke was that we would never venture in that again. However, I believe that it’s improbable anyway because it’s logistically not easy to take such a show on the road.

How did you meet Tom?

He already knew my mates, and he came to see us play a show in Zürich. He was secretly auditioning me for the Triptykon show, haha.

I consider the concert a Celtic Frost event. It feels like Tom is finally comfortable with the band’s grand heritage. Were you familiar with the band and the groups legacy as one of the forefathers of extreme metal?

Of course. I first heard of them when “Monotheist” came out, and it snowballed from there.

You are a tremendous vocalist, and you must be classically trained to have the command over the range of your voice. So you have a vast talent, but where did you learn to control your voice?

Thank you. You flatter me, haha. I was never vocally trained, though. I had music classes in school, but I sang to my parents and friends a lot. I practised alone by imitating other singers’ techniques.

I read that you are from Tunisia, although you now live in Europe. Can you tell me about the Tunisian metal scene? It looks like there is a small but intense metal scene featuring bands such as Myrath.

To be honest, I only witnessed it for a few years. There was (and still is) indeed an ambitious metal scene, but there were (are) also various amateur promoters. If you think metal is underground in the West, it’s even more underground in Tunisia. This allows for knavish behaviour from gatekeepers that goes unpunished regularly.I remember how hard it was for female musicians to be in the Tunisian extreme metal scene, so I found myself writing lyrics for some bands instead of performing. I tried starting bands with friends, but it felt useless as I simply felt uncomfortable with the Tunisian society. I favoured working internationally instead. We also had a radio show (I think it still exists) called “Zanzana” (noise) and every metalhead was glued to the radio at 21H sharp on every Thursday. It helped many bands, including Myrath, to get a head start in the local scene.

You must have some recordings in the market for people to listen. What bands or projects have you been in?