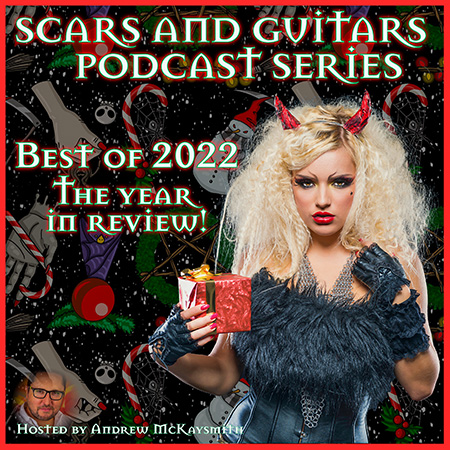 Here we are at the end of another year. The world might be full of nut cases trying to convince you that we are all doomed, yet the wheels keep turning, and there is always plenty of killer new music to share.

On this special end-of-year edition of the show, 2022, gets a review. The top 10 albums are revealed in a countdown alongside some honourable mentions, and the best tunes of the year are curated in an extended playlist offering the greatest from a superb cast of bands. We also pay tribute to and remember the fallen, those who are no longer with us, the tremendous musicians and artists whom we will miss.

Almost five hours of music, commentary and the top 10 countdown are here to sate your Christmas and new year music fix!

It’s a tough one, but there can only be 1 number one. This year, it belongs to Meshuggah. I described Immutable as a bare metal respray on the group’s signature sound when I spoke to drummer and percussionist Tomas Haake this year. He didn’t disagree. The speed of each hammer blow harks back to the group’s earliest offerings. The dynamic on this album focuses on the economy the group can squeeze from a few choice ideas. Gone are the drawn-out sections that characterised recent albums. A feature of Immutable is how fast the band gets stuck into the swing of the groove within each song. It is great to hear the band focus on nailing the groove rather than continuously expanding.

The signature track is “Ligature Marks” 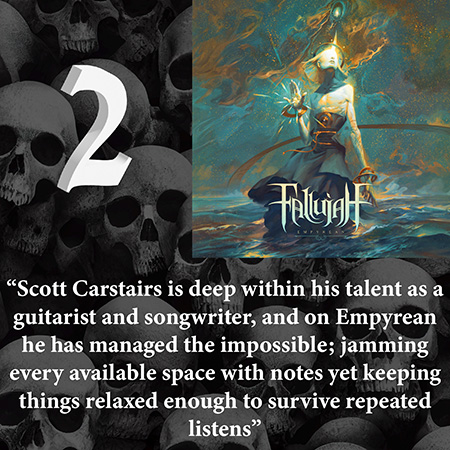 Similarly to Matt Wilcock, Scott Carstairs is deep within his talent as a guitarist and songwriter. Throughout our chat for the podcast, Scott went to exceptional lengths to explain how he ensured Empyrean is an album that, once it grabs your attention, will keep revealing layers of exciting sounds and the very best aspect; it’s not quantised. Scott has managed the impossible, jamming every available space with notes yet keeping things relaxed enough to survive repeated listens.

= #3: The Antichrist Imperium – Volume III: Satan In His Original Glory and Werewolves – From The Cave To The Grave

These two albums feature the songwriting and guitar playing of Matt Wilcock. Matt’s technique is an explosive mix of death shred, black metal, riff rock, and classic melodic rock. It is not unreasonable to suggest that right now, there are few, if any guitarists in the same league. From The Cave To The Grave is eviscerating death metal, and Volume III: Satan In His Original Glory is atmospheric blackened death.

Werewolves – “We Are Better than You”

#4: Watain – The Agony and Ecstacy of Watain

Erik Danielsson and the band have never sounded more confident; they’ve added heavy metal bombast to their signature blackened Stuka dive bombing and the production has evolved to reveal deeper layers of guitar. The Agony and Ecstacy of Watain is the sound of a band that has reached the pinnacle of their collective ambition and succeeded. Watain is rivalled only by Behemoth as the most extreme band to gain a significant audience.

The signature track is “Serimosa”

A new Belphegor album is always unique. Helmuth sounds like he’s having the time of his life on The Devils, an album of ritualistic satanic metal. Expect plenty of riff arpeggios heaving molten lava ala Morbid Angel, spliced with crushing heaviness and some moments where the band take the dance macabre down a gear or two. I wish Helmuth did proper interviews, as I would love to gauge his thoughts on a heap of topics far beyond what we covered during an email Q&A years ago.

Crushing stoner grind from Melbourne, one of the few bands worthy of entering the temple forged by Matt Pike and Sleep. I’m hoping these guys play Brisbane soon, as I’d love to feel what they are like live; yes, it’s not just about sound; Motherslug has such an almighty groove on Blood Moon Blues that it’s a visceral experience they will make your eyeballs rattle.

The signature track is “Hordes”

A chat with vocalist Emma Nausland gave me all I needed. Ethereal hard driving rock n roll crafted by exceptional musicians. The entire album is a study of dynamics, with the musicians holding a tight groove for Emma’s voice to shift from soaring to a lullaby. The album is also proof that Scandinavia is the epicentre of the rock and metal universe.

The signature track is “Exoskeleton.”

#8: Voodoo Moonshine – Bottom of the Barrell

The odd one out, you may soon think, but I’ve long been a fan of no-bullshit blues-inspired American rock n roll. I don’t think anyone else released an album like Bottom of the Barrell this year. I spoke to Jeff and Pedro from the band this year; check out the conversations if you want deeper insight into what makes the band tick.

The signature track is “Bring it Down.”

The finest Icelandic West Fjord death metal around. The band’s mastermind, Smari Taruf, released a handful of albums this year, and Patronian is undoubtedly the jewel in the crown for this prodigious songwriter. Snarling, grooving, mid-paced death metal with some old-school classic rock moves, Stabbed with Steel contains plenty of variation

The signature track is “Stabbed with Steel.”

This album from this British band has attracted less attention than it deserves. The production is a touch underdone and not as crisp as (say) Cabal’s Magno Interitus (an album that nearly took its place here), but the songwriting is on point. What these are doing is taking the sound of the underground in 2022 and making it sound palatable for the audience more attuned to Lamb of God and Gojira.

The signature track is “Suffer Alone.”