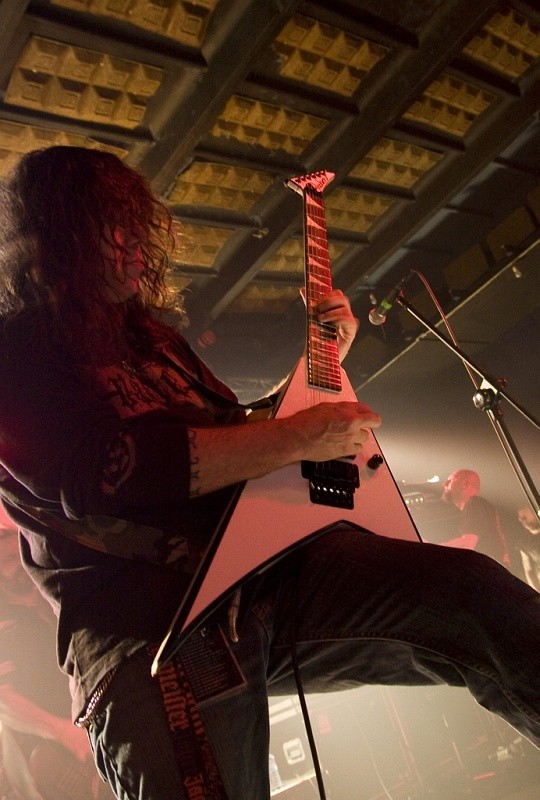 Sunday, December 17, 2006, was a typically balmy summer evening in Brisbane, QLD, Australia. It was also the night that Floridian death metal outfit Deicide performed a barnstorming set at the (now long gone) The Arena venue in Fortitude Valley.

A performance from Deicide is a special event in itself. However, it became something of a boon for shred guitar fans as Ralph Santolla, the one-time guitarist for a slew of bands including Death and Iced Earth, stood stage right of Deicide’s polarising bassist and vocalist Glenn Benton, and proceeded to deliver a masterclass.

The crowd were unruly that evening, just as they had been for Cannibal Corpse in October of that same year. A punter spat on Benton, and the lewd behaviour continued to the point that Benton started skipping songs in the set. Moronic punters and a shortened setlist be damned, this was an exceptional performance from the band, especially Santolla.

It is a quality to observe when watching a musician who is exceptional at their craft; notice they perform with an air of nonchalance as if they have all the time in the world. Tonight, former Cannibal Corpse guitarist Jack Owen complimented Santolla’s beautifully melodic soloing and the brutal rhythmic onslaught of drummer/ percussionist Steve Asheim. Both are excellent musicians, so it was even more noteworthy for Santolla to steal the show.

I won’t forget Santolla’s performance that evening, as I am sure so many heavy metal fans won’t forget the outstanding guitarist. He died in a hospital in Florida on Wednesday, June 6, 2018.

I had two conversations with Santolla. When I left my role as an Account Executive at the Australian telecommunications company Telstra in mid-2017, I was determined to forge a new path as a journalist and writer. Part of my journey was to reach out to favoured musicians and seek an interview. Santolla was a prime subject on my wish list, and he dutifully agreed to a chat after I contacted him on Facebook.

Santolla spoke his mind. He was mindful to appropriately represent his thoughts and feelings on so many people he performed alongside and discuss career episodes. I had given him a commitment to send him an unedited transcription of our chat, which was a far-reaching conversation that lasted for over an hour.

I still have the transcription and audio of our chat from that day, it’s a great read, and it’s always a joy to hear him talk. However, reading an email exchange between us from the time, Santolla wanted to chat to go over some ‘small’ things he must have picked up in the transcription. As he was about to travel to Connecticut to work with famed producer Max Norman (Ozzy Osbourne, Megadeth), he couldn’t lock in a time to discuss.

Fast forward a few weeks, and I reached out to him to see if he had found the time to go through conversational threads in the transcription to publish the audio eventually. Santolla thought it would be a far better idea for us to chat again. So that is the audio posted on my Scars and Guitars podcast series.

Fortunately for me, I got to chat with one of my all-time favourite guitarists about his career (when it’s all said and done) for well over two hours!

In the back of my mind, I like to think that the God-force that holds everything together knows how special I feel Santolla’s guitar playing is and that I had enough merit points in the karma bank to warrant another conversation with him. Either way, it was a unique experience, I must say. He was light-hearted and funny as he answered my questions for a second time.

Will I publish the audio or the transcription of the first conversation? No. Santolla felt that there were comments he prefers not to reach the public domain, and I will always respect that. Nothing in the content of the commentary from our first conversation is in any way controversial or slanderous as far as I’m concerned. I’m sure he knew the material that he didn’t want broadcast, but I’ll never know what he wasn’t satisfied with as we didn’t talk about it.

At the time of writing, I have interviewed over 250 artists. My conversation with Santolla will remain a favoured podcast as it was one of the episodes where I realised that I might have a shot at making this burgeoning journalism and writing enterprise more than just a hobby. Note- A year after the conversation, and at the time of writing, I am a full-time Journalism student at Bond University, Gold Coast.

Having had time to reflect on Santolla’s impact on modern heavy metal now that he’s no longer with us, it isn’t easy to articulate just how different he is compared to just about every other extreme metal guitarist out there.

Some guitarists excel at shaping chords, so each riff sounds like the precise gear change of a Formula One race car. Others have perfected the art of crisp and clean picking strokes so that each note resonates. Heavy metal appeals to fans due to the myriad of fret bending guitar solos. Santolla was an equal measure of the first two descriptors with a double serve of the third, his guitar solos on The Stench of Redemption (Deicide-’06) captivate and enthral.

Santolla breathed new life into Deicide after the messy split with foundation guitarists and death/ thrash masters Eric and Brian Hoffman. But that isn’t the reason his tenure in Deicide is most noteworthy.

Through Santolla’s solos across The Stench of Redemption, one can hear the influence of Queen‘s brilliant guitarist, Brian May. Echoes of the flamenco master, Paco De Lucia. The power of the great and often overlooked one time Scorpions and UFO guitarist Michael Schenker and long-time replacement, Uli John Roth; and Jazz fusion virtuoso and proto-shred icon, Allan Holdsworth.

Santolla somewhat broke the mould of death and extreme metal soloing. So much so that it was re-cast through his performance across The Stench of Redemption.

I have made a concerted effort to purchase each Deicide and Obituary album on vinyl (he joined Obituary after he left Deicide) that feature Santolla. I’m almost there and am yet to commit to looking for the vinyl edition of his lone Iced Earth appearance (power metal isn’t my thing). I would dearly love a mastered copy of a live performance of Santolla in Deicide from 2006/7. If an eagle-eyed reader has a copy, hit me up!

There are plenty of eulogies and thoughts from fans out there on social media. He made an impact on people’s lives and created a lasting memory. I’m sure wherever he might be right now, he is chuckling over the confusion in the public domain over the day of his death. A family member posted a well-meaning and sentimental statement on Facebook when Santolla was still in a coma, alluding to his passing.

Ralph Santolla is one of heavy metal’s revered and posthumously sanctified guitarists and shredders.