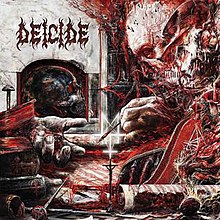 Few would predict that in 2006, Deicide would recruit ex-Death and Iced Earth guitarist Ralph Santolla (RIP) for a trio of albums following the split with founding guitarists Eric and Brian Hoffman.

The first album in the trilogy, The Stench of Redemption (’06), continues to cast a mighty shadow over the rest of the Deicide catalogue.

Deicide has surely struggled under the weight of Santolla’s legacy, however, they now have a guitarist capable of at least performing his virtuosic solo’s and lead breaks. The addition of Mark English as lead guitarist on Overtures of Blasphemy, replacing Jack Owen (ex-Cannibal Corpse, Six Feet Under) and subbing for the ambitious, yet under-qualified Kevin Quirion, is a boon for bassist/ vocalist Glen Benton and composer/ percussionist Steve Asheim.

English enjoys a superb career in the underground as Monstrosity’s resident shredder, bringing a seriously improved grasp of nimble fretboard gymnastics to Deicide. English is not as inventive as Santolla and he has not been given nearly as much creative licence, yet his ‘Hoffman-esque’ take on leads and solos enhance Asheim’s riffs and arrangements which serve this album’s musical narrative.

If Overtures of Blasphemy can be summarised neatly, it identifiably captures the essence of the bands 90’s offerings. With the exception of the tepid “Crawled from the Shadows”, the other 11 cuts across the album could well be updated versions of songs composed by Asheim and performed by the brothers Hoffman and Benton in 1995.

At this advanced stage of the band’s career, it’s a unique proposition as many fans in the Deicide cohort prefer the melodic odysseys released during Santolla’s three-album tenure rather than the malevolent death thrash of the Hoffman’s from yesteryear. Overtures of Blasphemy doesn’t ignore the properties that make the Santolla era burn so bright, however, it has pushed them to the fringes of the songwriting template by focusing on tight riffage and shorter stanzas within each song.

Echoes of Santolla are apparent on the cut “Compliments of Christ”, at the 1:44 mark, where English offers an arpeggio laced solo that is over all too quick. Quirion passes the baton to English at the 1:17 mark of “All That Is Evil” for a superb melodic solo and lead break.“Defying the sacred” and “Anointed in Blood” demonstrate English’s considerable chops, the latter opens and closes with a string-bending solo phrase that deserved to be expanded upon by many measures.

Benton is his usual grumpy self. His vocal cadence spits blasphemy and themes less savoury, the mix accommodates his evolving gruff and lower vocal. Except for some neat phrasing at the 0:39 mark of “Flesh, Power, Dominion” and 2:19 of “All That Is Evil”, Benton keeps the bass hidden behind the guitars, as he has done across almost all of the Deicide catalogue.

Asheim trundles along in damn near the same manner as he has done for almost 30 years, he deserves a lot of credit keeping the Deicide train in motion.

The album cover art is on point, pundits have been praising its credentials on socials since it was available. It’ll look great on an all-over-print t-shirt.

Overtures of Blasphemy is an album that references the bands snappy 90’s material and is most notable for the addition and excellent performance of Mark English.