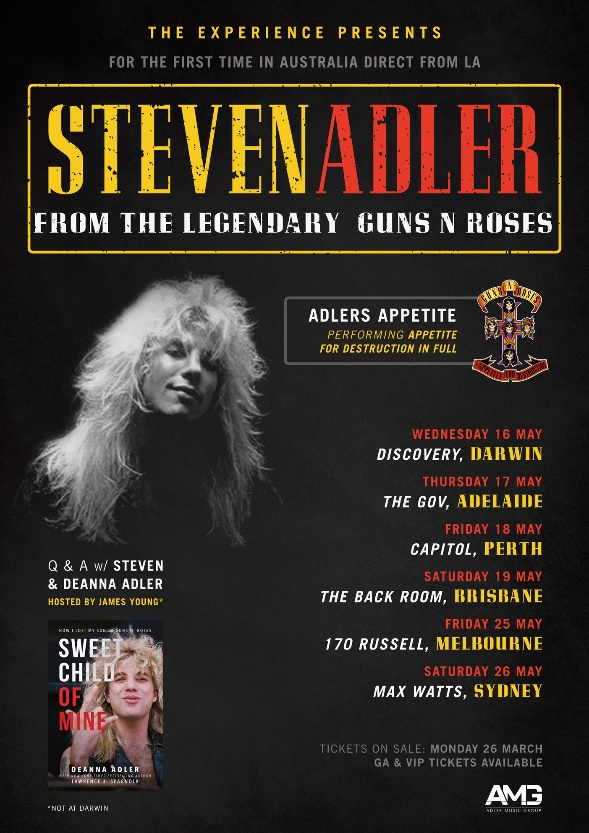 On a cold for Queensland Saturday night, Steven Adler, the man behind the drum kit during Guns N’ Roses most incendiary (musically speaking) years, performed at a venue in the Brisbane suburb of Annerley. The appearance included a ‘Q&A’ session featuring Steven and his mother (Deanna), followed by hits and cuts culled from his time in the iconic band. There were even a few choice selections from the Use Your Illusion (’91) album series, selections that Steven must have influenced the songs when they were in their composition stages.

The Backroom venue is a large room within the Chardons Corner complex, and it’s a gritty pub that still retains the essence of its years of hosting the State of Origin, NRL and Bledisloe Cup telecasts to punters who are equally at home watching a heavy metal or punk band. In short, it’s my kind of pub. However, The Backroom isn’t a venue that lends itself to a decent sound.

The mix veered between the diabolical ‘Red’ stage at Download this year and a sound resembling a closet full of my mother-in-law’s huge blanket collection cloaking the speakers. As I was standing next to the mixing console for most of the night, Señor sound-man was adept at managing the mix, but there is so much one can do given the room’s dynamics and quality of in-house speakers.

Another feature of The Backroom is that one can view the band from the side of the stage; many took that as a rolled gold chance to watch one of the best rock drummers and percussionists in the biz up close as he lay down some seriously tasty grooves. The on-stage mix was audible from this vantage point, offering a vast improvement over the FOH PA sound as well.

The Q&A was hosted by an MC and gave Steven and Deanna time to o air their thoughts on his well-documented battle with drugs and booze. As a parent myself I truly felt for Deanna when she mentioned (or words to the effect), that while it’s nothing unusual to witness a son or daughter tussle with substance addiction, it’s an entirely different scenario when 30 million people know who your son is. Elsewhere, Steven had to pause the session and ask a young lady in the crowd to settle down as she kept interrupting him and his mother. Manners much?

After Deanna and Steven had thanked the audience and left the stage, the crew got the backline sorted and did so to a soundtrack of rock classics that seem to please the crowd. The biggest singalong was for Aerosmith’s droll hit, “I Don’t Want to Miss a Thing” (Armageddon: The Album– ’98).

For what most had come to witness, it was time for the man himself to grace the stage. Steven leant back on his drum stool and performed hit after hit from the Appetite-era catalogue, supported by world-class rock musicians. Opening with “It’s So Easy” (Appetite for Destruction– ’87), the band’s first pause was four cuts into the set to introduce Steel Panther’s Michael Starr and Satchel for a memorable version of “Sweet Child O’Mine”.

Standing near the mixing console as I was, I did notice who I thought was a front-runner in the Bret Michaels look-a-like stakes milling about the desk. It turns out it was the venerable Steel Panther frontman!

Steven’s drum solo was performed between “Civil War” and “You Could Be Mine”, it was what you would hope: A groovy swing-infused ‘Charlie Watts’ lesson in the esteemed art of truly musical percussion.

Tonight’s performance by the Steven Adler band was excellent. But none of the musicians on the stage carries the same charisma that Steven radiates. His actual drum and percussion performance were one of those experiences you need to witness and hear to appreciate.

One can use all the epithets in the dictionary, but it’s better to state what needs to be said simply.

Steven was born to be a performing member of Guns N’ Roses. None of the classic formations of the Guns N’ Roses outfit members will ever reach their peak again until they reunite onstage together. I had a fabulous chat with Steven prior to coming to Australia for these shows, it wasn’t anything specifically that Steven said, but it must be hurting him that Axl, Duff and his dear friend Slash won’t reach out to him offer him the gig.

If there is a direct-to-desk recording of The Backroom performance, I hope Axl is sent a copy. After listening to it, he might even tap drum colossus Frank Ferrer on the shoulder and ask him if he’d step aside for a few songs each night and give the gig back to Steven for the Appetite-era catalogue.

From the archives: Deicide- Overtures of Blasphemy (Album- 2018)