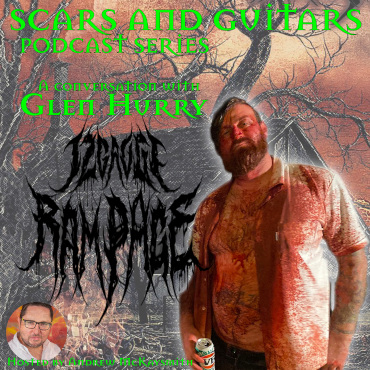 12Gauge Rampage releases their debut album ‘Unleash The Rage’ on August 5th through Grindhead Records. No better time to catch up with the bassist Glen Hurry to chew the fat about the album and a heap of other topics sure to catch your attention. Stay tuned right to the end as I pay tribute to two fallen titans of metal.

Since forming in January of 2020, in a small town of the Blue Mountains, 12Gauge Rampage has stormed in to take the Aussie metal scene out with a fusillade of sonic missiles, delivering their own brand of violent, slamming death metal that could grind the beak off an ibis. Hell bent on catching the unwary eye, 12Gauge Rampage offer an interesting and unique twist with their extremities, playing riff heavy deathgrind without the use of guitars or synth. Everything you hear, tracked and live, is shredded and delivered at pace from bass, drums, vocals… and an abundance of rage.

The band’s first video offering ‘#killedmorecuntsthancovid’ is about a bloke that’s struggling to make ends meet. He loses his job because of covid-19, the lockdowns, can’t pay bills, rent or buy food, his wife leaves him, he’s struggling with life and is suicidal. He realises that none of it is his fault, decides to hold society accountable, and proceeds with a frenzied rampage.

12Gauge Rampage release their debut album ‘Unleash The Rage’ August 5th through Grindhead Records, sharply followed by an Australian East Coast tour. Armed with a take no prisoners attitude, 12Gauge Rampage will slam you with a wall of sound, with the sole intent on rendering your body useless.