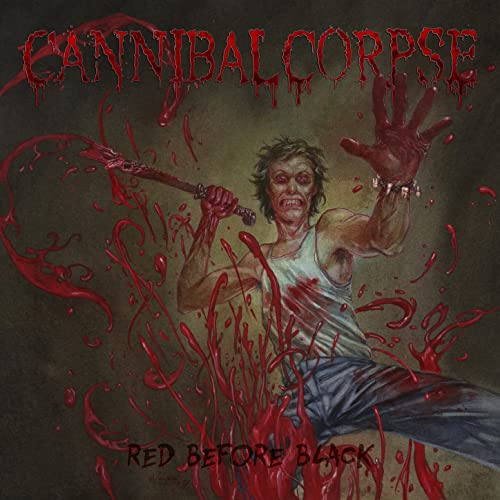 What can be written at this stage of their long and proud career to appropriately introduce a new album from death metal icons Cannibal Corpse?

The good news is that Red Before Black is everything you already know about the band. There are no curveballs or curious moments. At this stage in their almost 30-year history, that’s crucial to maintaining integrity with fans no matter which album they entered the Cannibal cannon of work.

Mark Lewis is credited with production (Trivium, Coal Chamber, Six Feet Under), and the result is a focused, even balance between instrumentation, giving Fisher’s vocal performance the mantle. It’s a bright, clear sound (well, for death metal) that mirrors their 2014 effort, A Skeletal Domain.

Webster’s bass tone has always been a contentious issue with many fans of the band. As one of the most competent bass players in any genre, his audibility across Cannibal albums lends itself to the listener investing in a decent pair of headphones or a personal speaker system. Red Before Black is no different if you want to sample the supreme bass playing Webster has to offer.

There are many highlights across the album: The breakdown riff that starts at 1:20 and continues through the fourth cut, “Shedding My Human Skin”, is amongst the heaviest the band have ever written; this cut even offers a nod to black metal through a bridging guitar lead. The fifth cut, “Remained”, opens with a dissonant brooding beast of a guitar intro that repeats throughout the song, a heavier than thou moment. The melodic speed-metal-inspired passage that starts around 1:45 in the sixth cut, “Firestorm Vengeance”, is the album’s musical highlight for me; budding guitarists and bassists should try playing along to that one at speed at home to improve their chops.

The video accompanying “Code of the Slashers” is closer to a Rob Zombie silver screen feature film excerpt… light years from the visual accompaniment to “Devoured by Vermin” from the history-making Billboard chart achieving Vile (’96). It’s fantastic to see Cannibal pay close attention to the thematic aspect of the band’s music after focusing on action shots of mimed live performances.

The lyrics follow the same narrative of every previous Cannibal album: Plenty of blood, sputum, violence and other vulgar themes. I’m sure the sicko’s out there who love the band for this less savoury element will get their money’s worth.

The band are blessed with a tremendous work ethic, and on Red Before Black, I get the impression that every detail that Webster, Mazurkiewicz and company could investigate was assessed. I’d love to see behind the scenes and witness the project management of the various stages of the creation of Red Before Black. As a musician, I find so much to admire about the musicians in Cannibal. Webster was interviewed by bassplayer.com in 2012 and offered this gem that summarises the band’s philosophy to getting it ‘right’:

“You’ve got to nail it live. Cannibal practices four days a week because we want these songs to be burned into our brains so that it’s as easy as anything else we do every day. You brush your teeth every day and wash your hair every day; these are things you can do without thinking about them. We want the songs to be that way, too. It’s the old “if you’re thinking, you’re stinking” thing. You should be able to go up there and play it perfectly while thinking about the pizza you order when the show’s done.”

Long may the reigning monarchs of brutal gore-infested death metal release albums as spirited and entertaining as Red Before Black.

This review was first published on October 25, 2017, on Metal Obsession webzine.